skip to main | skip to sidebar

I'm already planning my son's second birthday party. He turns two at the end of July. Is that bad? I just want to be prepared. I feel like last year I wasn't, and I think the party could have been better than it was. Soo.. I started on his invitations today!

His party is going to be a monster bash. I got the idea when I was looking at the issue of Taste of Home that had the monster cupcakes in it. They were sooo adorable that I just knew that I had to make them! I thought they'd be perfect for a birthday party!

This is one of the cupcakes (picture from Taste of Home.. I haven't made them yet..lol): 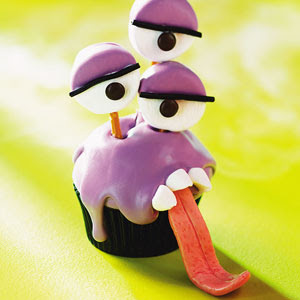 So. I've picked out the cupcakes. Since it's a little hard to find monster themed stuff in the colors that I want, I decided that I'm going to have to make a lot of things from scratch. And guess what paper line is in the exact colors that I want to use?? Jillibean Soup Monster Stew!! 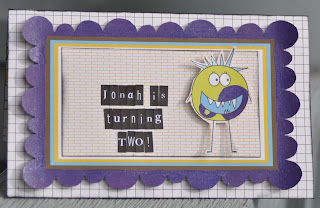 I used Jillibean Soup papers and Making Memories mini alphas. Also, I just received my Creative Inspirations DT box today! So, I used royal purple on the outside scallops and the circles on the monster (that's why they glimmer). I also used sky blue (the hair) and fairy dust (eyes and teeth), but you can't see them very well in the picture. Doesn't this look like a 2 year old's party that you want to attend?! hahaha :)
Posted by Dani at 1:50 PM

Wow - you have energy!!! For birthday parties, I make an event on facebook, make a cake, and let the kids play ... now I feel like a slacker! LOL Cute cupcakes and invites!

Dani
I'm Dani, and I'm from Alabama. I'm married to a wonderful man, Daniel, and we have a son, Jonah. We also have 4 dogs that I love like children. I love everything creative and I love making a mess with my art supplies! I've been scrapbooking for a few years now, but haven't really taken it seriously until recently. I love using bright colors on dark backgrounds.. and using PAINT. I also love taking pictures and I aspire to be a photographer one day!